Click here to listen to the glaucoma therapy success stories from Franses as audio (English):

Franses N. was already over 70 years old when she came to Savir Center for therapy for vision loss caused by glaucoma. Since 1998 this Australian was suffering from normal-tension glaucoma. Even though she had visited several ophthalmologists, and tried really hard to keep glaucoma under control, the progression of the condition could not be stopped. In the year 2020, her eyesight had become so bad that she was declared legally blind.

Because of her vision loss, Franses have tried many alternative methods for glaucoma. However, none of them brought her the promised success.

Visiting Magdeburg for Vision Loss Therapy Due to Glaucoma

Through her ongoing research on the internet, Franses found the Savir Center in Magdeburg, Germany, and then sought advice from multiple ophthalmologists regarding the Savir-Therapie. All doctors had heard of it, but advised against it because they weren’t convinced by it.

Franses on the other hand had nothing to lose. She was almost completely blind and would try everything she could to improve her sight. She had plenty of good reasons not to give herself up to the fate of being “blind”: Franses worked as an author and as an illustrator for children’s books. It is work that brought her much happiness, and for this job, she needs her eyesight.

But her vision was very blurry. “I am not able to determine how high a pavement is, I can´t even tell if there is a ramp. I felt unsafe, tripped often, and felt my blindness to be a big burden, also because I really liked to travel” the patient said. In 2019 she visited an artist residency in Island and wanted to visit there again in the future. But now, with her vision loss, she doesn’t feel safe doing it anymore. Even going to the local shops was becoming a real burden.

The fact that the Savir-Therapy was non-invasive, and wasn’t going to harm her in any way, helped Franses made her final decision. Franses then signed up for this vision loss therapy in Magdeburg, Germany.

Personal Experience With the Savir-Therapy

“I’m a very nervous creature”, Franses admits, “I don´t feel safe in medical or hospital situations, but I did feel incredibly safe at the Savir-Center. I felt safe, and that´s the most important thing.” She didn’t expect that her vision would get any improvement. But after all she learned from Prof. Martin in Moorfields/London that there “is something” that could help her with this Savir-Therapy.

The first effects of the therapy showed after a few days. “With my left eye, I feel it is a lot clearer. And I think I am seeing more with it. It is still early days, but I am aware of it being a lot clearer. When putting my eyeliner on in the morning, in the bathroom, I can see better.” Her eyesight also seemed to appear less gray and blurry compared to the situation before, and a lot brighter, Franses said. 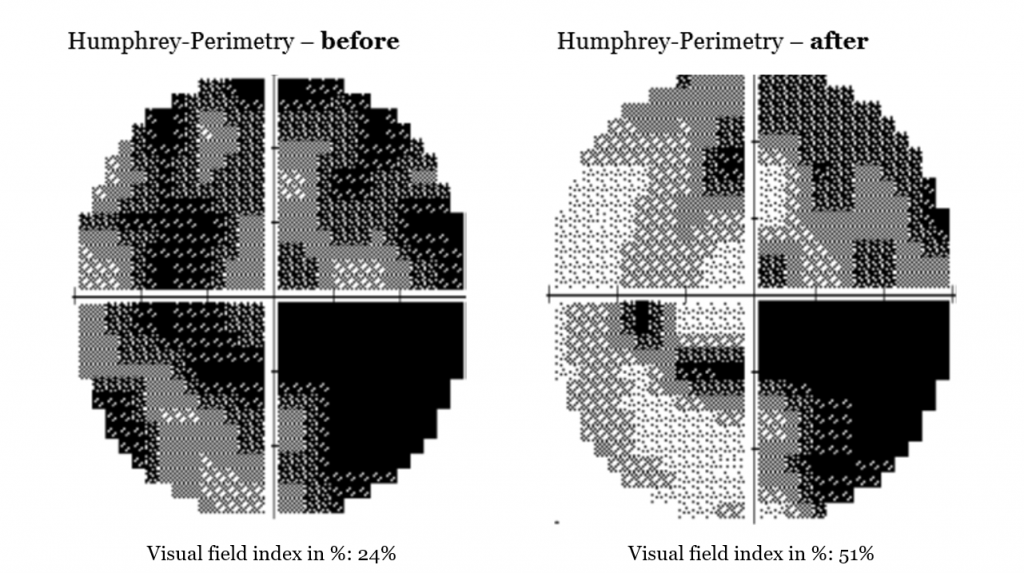 “During the last eye test, I was able to read five or six lines on the table with my left eye, that wasn’t possible before. I was only able to read three lines two weeks ago!”, Franses proudly explains the results. “During the first test when I just came here, I wasn’t able to focus with this eye at all, but now, fortunately, it worked!”

The Savir-Therapy showed almost no side effects with Franses. “The first day, when the stimulation went higher, I felt ill afterward and I had to go straight to bed.” she remembers, “Some days my eyes were very tired, I had to go home and close the eyes, but other than that, I had no problems.”

There Is a Light at the End of Every Tunnel

In the meantime, Franses is on her way back home. She knows, that the outcome of the therapy can still change. She was encouraged to continue to train her eyes, especially her left eye. “I have learned that there are many ways I can heal myself,” she said. “For example, eye yoga, conscious breathing, reducing stress. Combined with the ability to be a little egoistic and to be able to say no, which women in my era were not brought up to do. Now I know that stress can aggravate vision loss, especially, when you suffer from low blood pressure as well, and the eyes get less blood.”

She finished her therapy with a lot of useful information, and now has more hope to keep her newly gained vision. After all these, she realized how important it is to take responsibility for oneself and to walk one’s own path, even though others advise against it.